Wednesday of the Eleventh Week in Ordinary Time
June 15, 2022

Today, in God’s Lavish Mercy, we listen to Jesus’s instruction and promise about how to live at one with God.

Alleluia, alleluia.
If you love me and will keep my word,
and my Father will love you
and we will come to you.

What wonderful assurance! We don’t have to labor to find God, or worry about searching for God.

God will come to us – will blossom in our hearts like a sacred flower, – if we love Jesus and keep his Word.

In the opening sentence of her book “Too Deep for Words”, Thelma Hall, r.c. says this:

There is an inner dynamic in the evolution of all true love that leads to a communication too deep for words.  There the lover becomes inarticulate, falls silent, and the beloved receives the silence as eloquence.

Our Gospel elaborates on the invitation.

But when you pray, go to your inner room, close the door,
and pray to your Father in secret.
And your Father who sees in secret will repay you.

Let us savor these promises in our prayer today.

Poetry: in the silence – Rumi

Today, in Mercy, our readings focus on Scripture as the revealed Word of God. 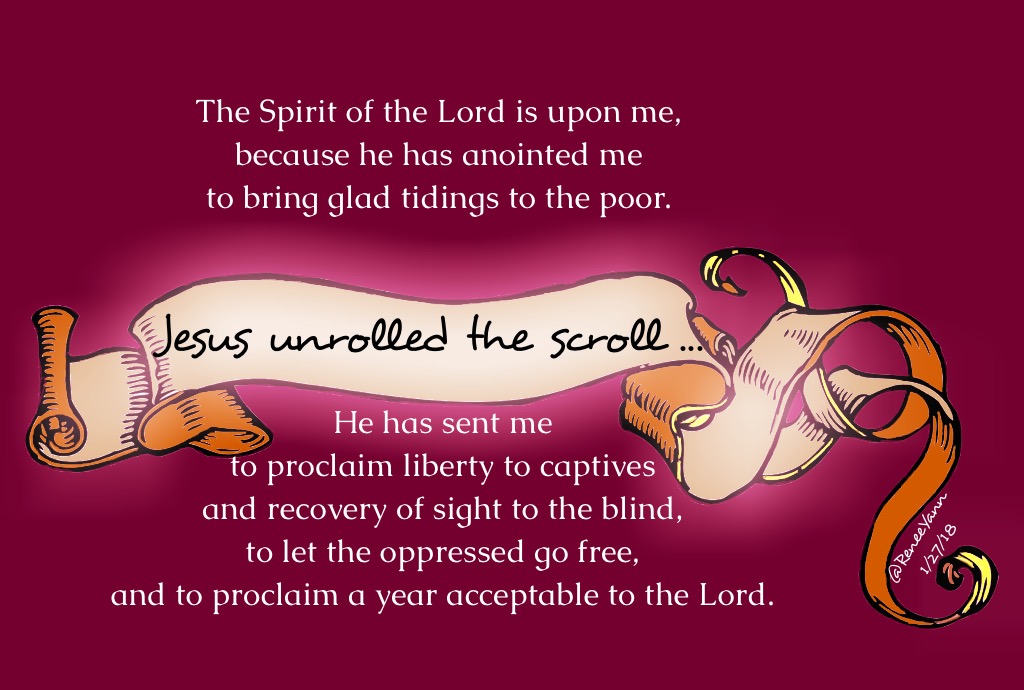 Ezra, from our first passage, lived almost 500 years before Christ during the Babylonian captivity, a time when much of the population of Judea was deported to what is modern day Iraq. When the Persian King Cyrus the Great conquered Babylon, the Jews were permitted to return to Judea.

During the sixty-year enslavement, many Jews lost touch with their culture, language and religion. Our reading describes Ezra’s efforts to restore the Jewish character of the community by reintroducing them to the Torah. He has to read to them, translating the Hebrew for those who no longer speak it.

In a gesture foretelling the liberating ministry of Jesus, Ezra unrolls the scroll – symbolic of bringing to light that which has been hidden or buried.

In our Gospel, Jesus too unrolls the scroll. In doing so, Jesus reveals the heart of faith which had been buried within the Law. Jesus preaches in a new “language” – the language of God’s all-inclusive mercy, forgiveness, and love.

For us who believe, the holy scriptures are a Living Word which, through thoughtful prayer, will continually reveal God’s heart to us. It is worth our time and attention to become friends with these sacred messages.

Many of you, dear readers, will be familiar with the ancient prayer practice of “lectio divina”. In her book “Too Deep for Words”, Sister Thelma Hall describes the practice:

… a wholistic way of prayer which disposes, opens, and “in-forms” us for the gift of contemplation God waits to give, by leading us to a place with him at our deepest center … It begins this movement by introducing us to the power of the Word of God in scripture to speak to the most intimate depths of our hearts …

Sister Thelma Hall’s Book, a classic, is available on Amazon for those who might enjoy exploring Lectio Divina. I highly recommend it. My copy, nearly 30 years old, is beginning to show its age, but then again, so am I! 😂 I would never part with it.