Thursday of the Twenty-fifth Week in Ordinary Time

Today, in Mercy – and tomorrow – we will hear from Haggai, one of the twelve minor prophets of the Hebrew Scriptures. These dozen writers are referred to as “minor” because of the length of their writings, not their value.

So Haggai, even though many of us have never heard of him, has something important to say for Judeo-Christian tradition and for each of us who read him. Let’s see what that might be. 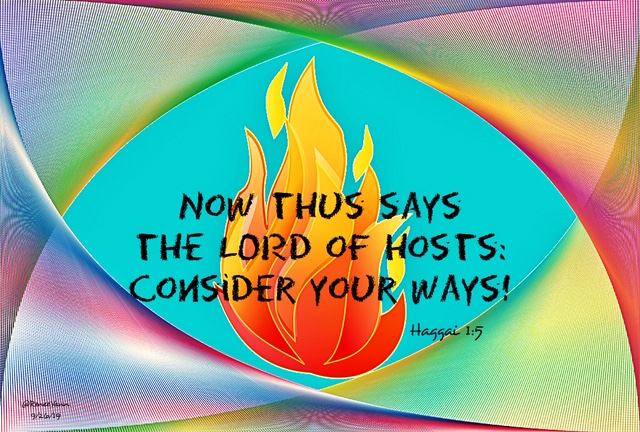 Haggai is prophesying during the Persian period of Jewish history, around the middle of the 6th century, BC. The Jewish people had been back home from the Babylonian captivity for almost 20 years. When they first returned they were passionate about rebuilding the Temple. But as the decades passed, and opposition from their non-Jewish neighbors increased, their commitment waned.

The building of worship places has always been an activity with fans on both sides of the aisle. Some argue that God needs a spot where the Divine Presence can be recognized and revered. Others believe that the effort and resources expended in such building could better be used in human services for God’s poor and needy people. Haggai’s community had people in both camps. (Sound familiar?)

Haggai offers a turning point for their arguments. He tells the people they are a mess. The absence of a central symbol for their faith has weakened and scattered them to their own selfish pursuits. He tells them to look at themselves:

The Temple, while it is important, isn’t the most important part of Haggai’s prophecy. He tells the people they have lost their souls. The lack of a central, shared faith has caused them to forget who they are. They will remember only when they remember God’s centrality in their lives.

Haggai appeals to the people to restore a public life which gives honor to God. For their time and circumstance, such a return is symbolized by the rebuilding of the Temple which had been destroyed at the time of their enslavement by Babylon.

We humans often forget what’s important. We chip away at, and ultimately destroy, what makes us who we are by little acts of faithlessness, deceit, covetousness and envy. These small treacheries grow into big ones redeemable only by an impeachment of the soul and the renewal of a common moral purpose.

If the message strikes you as extremely germane to current day realities, I’m glad.

Music: Come Back to Me – by Gregory Norbet, sung by John Michael Talbot