Feast of the Chair of Saint Peter, Apostle
February 22, 2020

Today, in Mercy, our reading is about God naming us.

We celebrate wonderful Saint Peter – so fully human, so fully holy, so fully in love with God! Today, as we pray with Peter’s naming, may we deepen in understanding our own naming by God.

I wrote about Peter like this on another of his feasts:

When Jesus asks Peter what he believes, Peter says,
“YOU ARE THE CHRIST, THE SON OF THE LIVING GOD.”
An ordinary man responding with a clear and extraordinary faith. 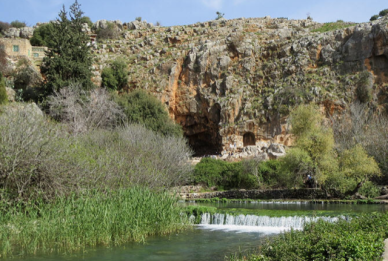 One June morning, about forty years ago, I sat in a sun-filled field in the Golan Heights of Israel at a spot called Caesarea Philippi. Thirty other pilgrims composed the group as we heard today’s Gospel being read. Listening, I watched the rising sun grow brilliant on the majestic rock face in the near distance.

I thought how Peter might have watched his day’s sun playing against the same powerful cliffs as Jesus spoke his name:

Jesus said to him,
You are Peter (which means “Rock”),

and upon this Rock
I will build my Church. 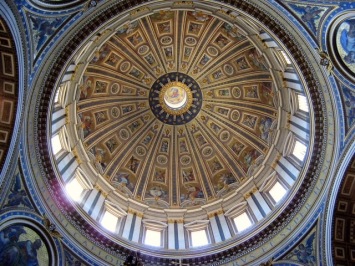 A few years later, I stood at the center of St. Peter’s Basilica in the Vatican. Looking up, I saw these words emblazoned around the awesome rotunda dome:

On that lazy afternoon two-thousand years ago, Peter could never have imagined what God already saw for him. Yet, Peter responded – with his whole life. This is what makes a Saint.

Jesus calls us to be saints too. He lovingly speaks our name into a sacred future we cannot even imagine. But if, like Peter, we trust and believe, God does the rest.

Below the music is a powerful poem by John Poch. It captures the transformation of Peter’s humanness into God’s hope for him.

There are three things which are too wonderful for me,
Yes, four which I do not understand.
The way of an eagle in the air,
The way of a serpent on a rock,
The way of a ship in the heart of the sea,
And the way of a man with a maid
–Prov. 30:18, 19

I
Contagious as a yawn, denial poured
over me like a soft fall fog, a girl
on a carnation strewn parade float, waving
at everyone and no one, boring and bored.
There actually was a robed commotion parading.
I turned and turned away and turned. A swirl
of wind pulled back my hood, a fire of coal
brightened my face, and those around me whispered:
You’re one of them, aren’t you? You smell like fish.
And wine, someone else joked. That’s brutal. That’s cold,
I said, and then they knew me by my speech.
They let me stay and we told jokes like fisher-
men and houseboys. We gossiped till the cock crowed,
his head a small volcano raised to mock stone.

II
Who could believe a woman’s word, perfumed
in death? I did. I ran and was outrun
before I reached the empty tomb. I stepped
inside an empty shining shell of a room,
sans pearl. I walked back home alone and wept
again. At dinner. His face shone like the sun.
I went out into the night. I was a sailor
and my father’s nets were calling. It was high tide,
I brought the others. Nothing, the emptiness
of business, the hypnotic waves of failure.
But a voice from shore, a familiar fire, and the nets
were full. I wouldn’t be outswum, denied
this time. The coal-fire before me, the netted fish
behind. I’m carried where I will not wish.

One thought on “Who Are You?”