Today, in Mercy, we celebrate the great Apostles Peter and Paul, first architects of the Christian faith. 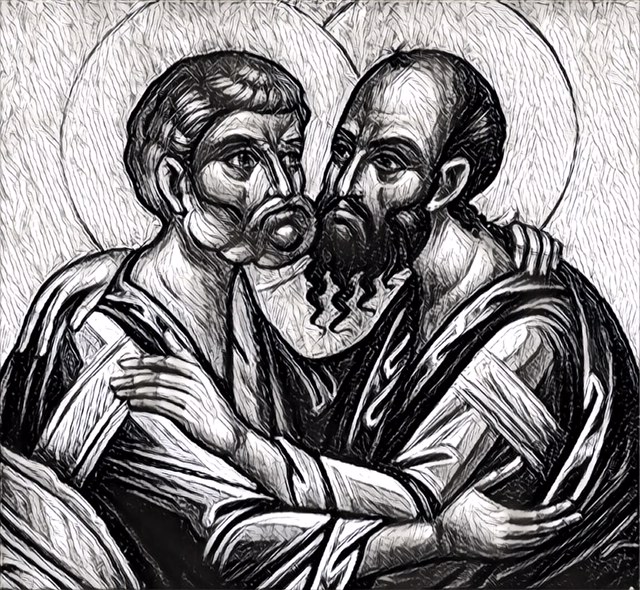 From our 21st century perspective, we may be tempted today to celebrate the totality of their accomplishments – the scriptures ascribed to them, the theology traced to them, the cathedrals named for them.

But there is a deeper message given to us in today’s readings, one that challenges our practice of faith. We can access that message by asking an obvious question:

Why were Peter and Paul, simple religious leaders, persecuted, imprisoned, harassed, and eventually executed? What was the terrible threat these unarmed preachers presented to political power?

It was their testimony to the transformative Gospel message of Jesus Christ – the Gospel of Mercy and Justice.

But Jesus’ proclamation of God’s kingdom constituted a serious challenge to the Romans who ruled Israel during his lifetime. The cheering crowds who greeted him, especially during his entry into Jerusalem, as well as his confrontation with the moneychangers in the Temple, constituted such a threat to the unjust power of empire that the rulers crucified Jesus in order to silence him. – Elizabeth Johnson, CSJ

Peter and Paul, and every committed Christian after them, bears the same holy threat to ensuing cultures of domination, violence and greed.

As Jesus, Peter, Paul and so many others down through Pope Francis show us, faith and politics always work hand in hand. The work of faith is to build a world where every person can live, and find their way to God, in dignity and peace. It is to witness to an alternative to any power that feeds on the freedom, joy and peace of another person – especially those who are poor, sick and vulnerable.

May Peter and Paul inspire us to continue the daunting task of such an apostolic faith.

Music:  They Who Do Justice – David Haas

2 thoughts on “The Challenge of Peter & Paul”