Today, in Mercy, our first reading startles us with how foolish the Israelites are about their leaders. Oh, wait a minute, why are we so surprised? Don’t we see the same dynamics all around us?

Israel is desperate for a “strong man” who will mimic the tyrants leading their enemies. They say a king will “rule us and to lead us in warfare and fight our battles.” They begin to envision a nation of their own design, not God’s.

They believe that having an absolute leader will make them strong. They are indifferent to Samuel’s warnings that such a choice will usurp their freedom, and lead to their devastation and enslavement.

God tells Samuel that, in rejecting the choice for responsible, spiritually-grounded, and mutually sustained leadership, the people are rejecting God and God’s plan for them.

In a nutshell, Israel’s problem is this: they have forgotten who and whose they are. For the sake of expected political dominance, they are willing to sacrifice their identity as a people formed and led by God.

Centuries later, in today’s Gospel, Jesus comes among these dispirited people. Their choice hasn’t worked. They are still a politically dominated nation. Their religious practice has lost its vigor, denigrating into lifeless rules and practices. A corrupt religious class manipulates them.

Jesus, ignoring their religiously manufactured limitations on the Spirit, cures a paralytic. The scribes are scandalized. But Jesus confronts their equivocation:

Jesus said, “Why are you thinking such things in your hearts?
Which is easier, to say to the paralytic,
‘Your sins are forgiven,’
or to say, ‘Rise, pick up your mat and walk’?
But that you may know
that the Son of Man has authority to forgive sins on earth”
–he said to the paralytic,
“I say to you, rise, pick up your mat, and go home.”
He rose, picked up his mat at once,
and went away in the sight of everyone.
They were all astounded
and glorified God …

What would the world be like if we left ourselves so open to grace and mercy that God could work through us for the good of all Creation? Can we even imagine such freedom and trust? Can we even imagine the marriage of our faith and politics to the point that we all live for the common good?

Today, in Mercy, our readings bring to mind the role of religion in our spiritual life.

The dictionary defines religion as a particular system of faith and worship. The origin of the word “religion” is from the Latin “religare”: to bind.

In the magnificent passage from Ezekiel, we are given a metaphorical description of grace flowing from the Temple, the locus of faith for Israel. Ezekiel is led by a radiant vision to this source of abundant life symbolized by water. Slowly and incrementally, this abundance deepens for Ezekiel, until he is swimming in its grace.

Ezekiel’s vision demonstrates what happens in us when religion, ritual and law enhance grace. The beauty, power and architectural symmetry of the Temple symbolize the great benefits of religious practice.

Our Gospel, on the other hand, shows us a Pharisaical religion built on empty practice and bereft of heart. When Jesus cures on the Sabbath, he moves beyond these skeletal boundaries to mercy, which is the reason for all religious practices.

Jesus shows us that when religion – and its ensuing ritual and law – bind grace, it needs to be set aside. His whole life was predicated on a faith which generated mercy, not sacrifice. The alleviation of suffering and need always supersede observance – even on the Sabbath.

When we see any so-called faith or religion which places law over mercy, we see an empty temple where the river of grace has run dry. Our culture is filled with fake holiness that measures, condemns and ostracizes others. We see religion distorted into political bullying. We see it redefined as an excuse for excessive wealth. We even see it used as legitimization for nationalism, violence, racism, and war.

Today’s readings tell us to be on guard. The forces which twist religion are very subtle and pervasive in our culture. They dress themselves in impressive words and practices, just like the Pharisees did, but their costumes hide an ugly hate and fear.

To the fearful and weak, these forces preach power – but it is a power over not for others.

Jesus has shown us what faithful practice looks like: mercy and love. It is vulnerable, courageous, inclusive, and humble. It sees the suffering of others and responds. It waters the Temple of our hearts to make them verdant with hope, joy and generosity.

Today, in Mercy, our Gospel tells of a memorable event – so memorable that it is described in detail.

Jesus preaches from a neighborhood living room. Every access point to the house is blocked with excited listeners and miracle-seekers. Jesus has been corralled by the enthusiastic faithful. 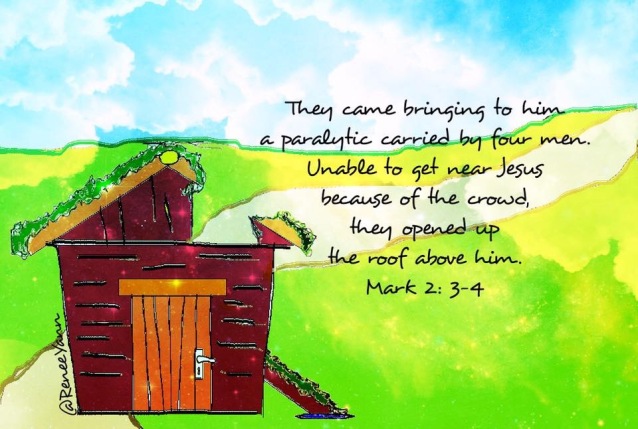 Then some latecomers arrive carrying their paralyzed friend. It is easy to imagine that these are young guys, because Jesus later calls the paralytic “Child”. Perhaps their friend was injured in a soccer game or diving accident in which they all had participated. Perhaps, as well as carrying him, they are carrying the burden of “survivor guilt”.

Whatever the situation, these friends are determined that the young man shall see Jesus. Confronted with the barricading crowd, they climb up on the roof, opening the turf plates to make an entry point. Jesus had to laugh as he saw to rooftop disappearing above him!

Would that we had such a wild desire to be in God’s Presence – to know God face to face, and heart to heart!

Can we peel away the many barricades to such relationship? We have only our limited human images of God. While these can help us pray, they can also box God.

Faulty theology and exaggerated ritual can, believe or not, put a lid on God’s power!

It is important to read, listen, and grow within good theology. One measure of that value is the degree of limitation any “theology” puts on God. A theology that limits God to male, white, Catholic (or whatever religion)- that kind of false theology limits us as well.

A theology that is used as validation for political, economic, or moral domination distorts God, making God an idol of our own greed and selfishness. Such ”theologies” have, for centuries, made excuses for slavery, apartheid, pogroms, wars and holocausts.

Let’s try to “take the roof off” our theology today. Let’s be sure our tightly held perceptions and beliefs are really leading us to the absolute freedom of a God Who cherishes all Beings, all Creation.