Feast of the Presentation of the Lord

Today, in Mercy, we begin with a reading from the prophet Malachi, a hurler of fire and brimstone in the 4th-5th century before Christ. It’s an interesting choice and begs the question of how it relates to this Feast when a little baby comes to be blessed in the Temple.

Ah, perhaps that’s the hinge – the Temple, both actual and symbolic.

Malachi writes at a time when the second Temple has been restored. In other words, God is about giving the people a second chance to behave according to the Covenant. But they’re not doing such a good job — especially those in charge, the priests:

A Little Extra Music: Handel – But Who May Abide (You know you have time to listen just before the Super Bowl!)

Through a series of prophetic oracles, Malachi admonishes the people to repent before it is too late because no unrepentant soul will withstand the judgement.

Yes, he is coming, says the LORD of hosts.
But who will endure the day of his coming?
And who can stand when he appears?
For he is like the refiner’s fire,
or like the fuller’s lye.

In the passage from Hebrews, Paul presents the perfect priest, Jesus Christ. In taking flesh, Christ’s Body becomes the new Temple of our redemption. We stand before judgement already saved by his Passion, Death, and Resurrection.

In our Gospel, two aged and venerable prophets wait in the Temple for the Promised One. Their long years of prayer have already proven them faithful. Now, Simeon’s and Anna’s long and complete fidelity is rewarded by seeing their Savior. They know Him because they have already created a place for him in the Temple of their hearts. Now, they will meet their judgement in total peace. As Simeon’s prays:

“Now, Master, you may let your servant go
in peace, according to your word,
for my eyes have seen your salvation,
which you prepared in the sight of all the peoples:
a light for revelation to the Gentiles,
and glory for your people Israel.”

It’s a beautiful, total-hearted prayer!  Don’t we all hope to be able to offer it one day?

Today, in Mercy, we have a flash back to Hebrews from a few weeks ago, and we have the account of the Transfiguration. How might these readings be related?

Hebrews seems to be a perfect summary and complement to the Genesis readings of the last few weeks. Paul ties together the faithful testimonies of the ancestors: 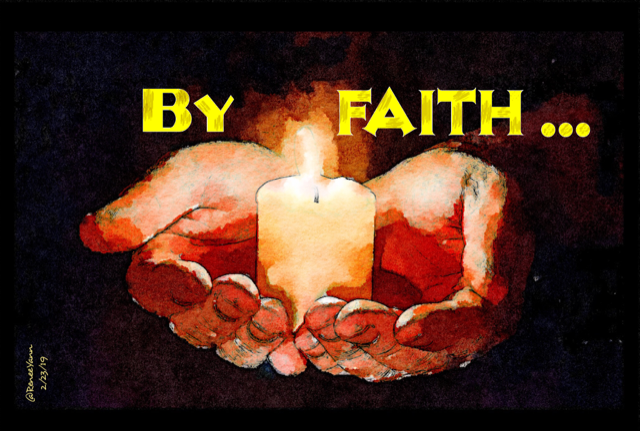 In Mark’s Gospel of the Transfiguration, Peter, James and John become the new “faithful ancestors”. Jesus relies on their faith for the foundation of the Church. Therefore, God allows them to experience the Glorified Christ so that their faith can sustain them through the coming Passion and Death.

All these witnesses encourage us to examine our faith. It has already carried us through many challenges in life. Remembering God’s past fidelity to us can strengthen us and help us focus on what is most important for a joyful life.

God’s voice from the cloud offered perfect advice to the three astounded disciples.

This is my beloved Son.
Listen to him.

Let’s open our hearts to listen to Jesus in prayer, scripture and the always deeply graced circumstances of our lives.

Music: I Will Listen ~ Twila Paris

Today, in Mercy,  the writer of Hebrews continues to shine light on the superior  “priesthood” of Jesus Christ – that aspect of Christ’s ministry that breaks heaven open for us and reinstates us as God’s children.

Hebrews calls Christ a priest “according to the order of Melchizedek” – an order above and beyond the priesthood of Aaron and Levi.

Although there are a few references to Melchizedek in scripture, only one narrative refers to him:

After Abram returned from defeating Kedorlaomer and the kings allied with him, the king of Sodom came out to meet him in the Valley of Shaveh (that is, the King’s Valley).
Then Melchizedek king of Salem brought out bread and wine. He was priest of God Most High, and he blessed Abram, saying,
“Blessed be Abram by God Most High,
Creator of heaven and earth.
And praise be to God Most High,
who delivered your enemies into your hand.”
Then Abram gave him a tenth of everything.
Genesis 14:17-20

Melchizedek, whose priesthood preceded even Abraham, is offered in Hebrews as a prototype of Jesus who fulfills and perfects the Old Testament promises.

Does this matter to us modern day Christians who can barely say “Melchizedek “, let alone spell it? And if it does matter, how?

An answer may be revealed in our Gospel today.

In it, Jesus challenges the old, Pharisaical, law-bound way of thinking. As the new and perfect “priest”, Jesus breaks that way of thinking with the transformation of love.

Today, in Mercy, our reading from Hebrews describes Jesus as the perfect high priest.  Through the Father’s call, Jesus took on our imperfect nature and transformed it by his life, death and Resurrection. In the Eucharist, Jesus left us a living memorial of this transformation so that we might participate in its saving mystery. 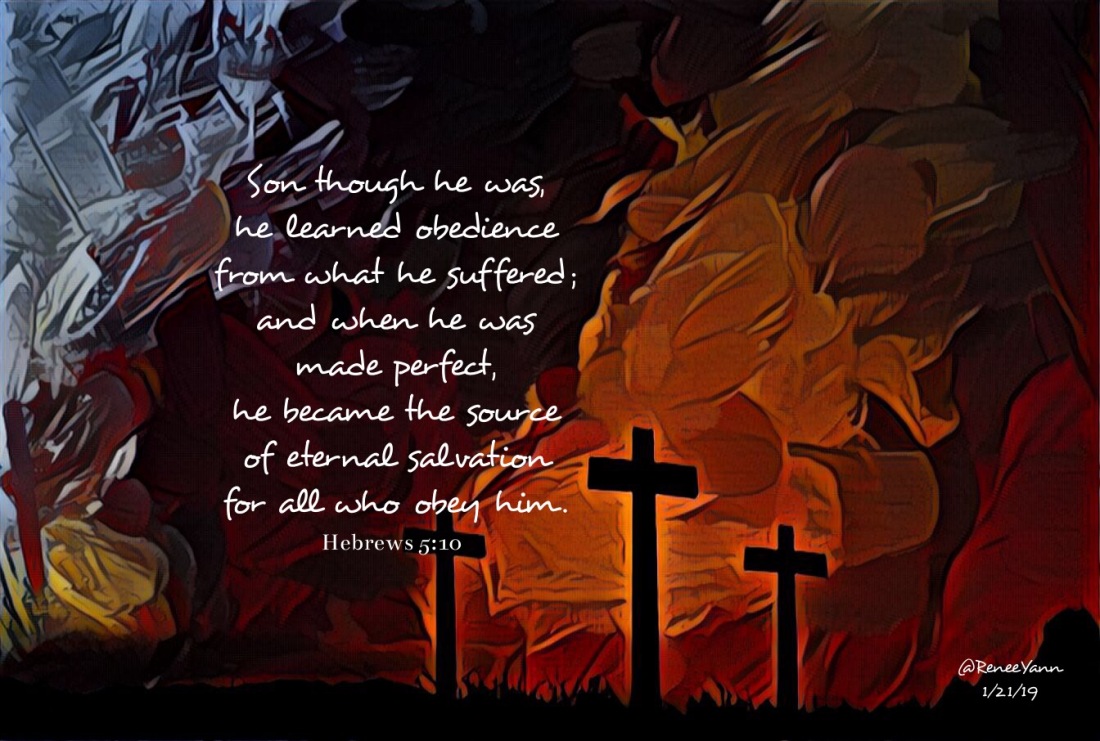 Paul’s “perfected priest” is patient because his own weakness humbles him. He does not take honor upon himself, but receives it humbly from God.

Jesus, the model of this priesthood,

… in the days when he was in the Flesh,
… offered prayers and supplications with loud cries and tears
to the one who was able to save him from death,
and he was heard because of his reverence.

The perfection of Christ’s priesthood was accomplished through suffering and obedience. This is how Jesus teaches us to live in reverence and humble service.

As I read and pray with this scriptural understanding of priesthood, I pray for our Church. The catastrophic scandals involving our priests and leaders have deeply shaken the faith of many Catholics, including my own.

Many of us are frustrated by the continued refusal of our Church to open itself to new models of priestly service which are grounded in mutuality, inclusivity and simplicity.

The accretions of institutionalization, hierarchical camouflage, and sexist rationale have mitigated the Church’s credibility to touch the lives of ordinary people, especially our emerging adults.

In our Gospel, Jesus talks about an old cloak that needs a patch to make it whole again. He talks about new wine that must be captured and preserved in new wine skins. For me, he is talking about our Church which must be continually renewed and transformed.

May our present suffering and confusion be transformed by our humble obedience to God’s call – just as the high priest of our first reading was perfected.

Let us pray today for our good Pope, bishops, theologians and spiritual leaders – and for the whole People of God – that we may hear and respond.

Music: Even Death on a Cross ~ Jason Silver

Today, in Mercy, we again read from the epistle to the Hebrews and the Gospel of Mark. We will be doing this for the next month or so.

Hebrews is unique in that it was written rather specifically for Jews who had become Christians. They were people who were steeped in the spirituality and expectations of the Old Testament. They had been waiting for a militant Messiah who would deliver them from earthly suffering by a display of power and might.

During the first century of Christianity, as the nascent Church experienced persecution, that hope for delivery re-emerged. Although they had accepted a Resurrected Christ, the community’s own present suffering fixated them on the Passion and death of Jesus. They questioned how that anguished man could really be the One foretold in their Hebrew Scriptures, and how he could transform their lives.

Can’t we empathize with those early Judea-Christians? The mystery of suffering and death still haunts us. Don’t we sometimes question why Jesus had to die like that – why we have to die, why the people we love have to die? Don’t we feel at least some resistance to this overwhelming mystery?

The author of Hebrews tries to address those doubts by showing that the majesty of Christ resides not just in his divine nature, but in his loving willingness to share our human nature. By doing so, Jesus demonstrated in his flesh the path we must take to holiness. He leads the way through our doubts if we put our faith in him.

This is the core mystery of our faith: that God brings us to eternal life not by a path outside our human experience. Rather, Jesus shows us how to pattern our lives on the profound sacrificial love which is the lavish Mercy of God. The path to eternal life is not around our human frailties but through them.

Mark gives us just one Gospel example of that love today in the healing of the man with the unclean spirit. That spirit was one of resistance to the Word of God, screaming out as Jesus began to preach a Gospel of love, faith, and forgiveness.

As we pray these scriptures today, let us put before God’s healing touch any resistance in our hearts to Jesus’s call to be merciful love in the world.

Music:  Crown Him with Many Crowns, an 1851 hymn with lyrics written by Matthew Bridges and Godfrey Turing and sung to the tune ‘Diademata‘ by Sir George Job Elvey.

This majestic hymn reflects how mid-19th century theology attempted to embrace the Redemptive mystery. Still, many of its suggestions, though cast in an earlier idiom, are well worth reflection.